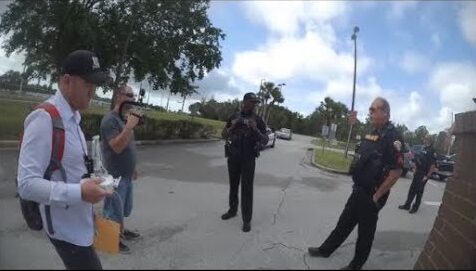 The United States is a nation of states that is governed by the constitution, there are 27 total amendments. We will be focusing on 1-5 primarily The First Amendment being our right to free speech. JMA is a supporter of free speech.  Help in protecting free speech and holding individual government workers and the government accountable. After all they hold us accountable with fines and penalties for messing up.

Advent of First Amendment Audits
Prior to people filming police, government, and other public institutions, there was a movement that became about called copblock or copwatch. This was a decentralized police accountability project. The mission is to hold police accountable. First Amendment auditing goes above and beyond that. It checks for the right to film police government and city halls. Its ultimately a check of the system

Would you like auditors to visit your town? We'd love to help out with problems and
document those.

Polite, Professional until not

When auditing we always recommended to remain professional until they dictate. We do not  need to talk to police. The only requirements for me is to remain silent, unless lawfully detained then I must provide your name and information upon demand.

Love what you do! Thank you for being a patriot! I support you 100% Thank you! You handle yourself so well, professional not confrontational usually unless they start messing with you. What I hate most is how you're just walking around enjoying an area then there's always someone who will come try to mess with you!